I tried to bring Dan Harmon’s ingenious sitcom Community to comics for years, and came close a couple times. I could see what it would look like, could imagine the fun the writers and characters would have with the comics medium, just as they had with stop-motion animation, anime and countless film genres before. The show’s rabid fanbase resurrected it again and again when so many other shows fell for good, and I believed they would follow Harmon to comics. A lot of them were clearly already comics fans. “Six issues and trade,” I told anyone who’d listen.

But it was a very complicated thing to get done. I originally talked to Harmon during season 3, when the show’s future was uncertain, and picked back up with him toward the end of season 5, when its cancellation by NBC made a comic appear the likeliest chance for continuation before its stay of execution came one last time, in the guise of Yahoo Screen. After a bunch of white-knuckle ups and downs, the project ended up in my list of the ones that got away (every editor has them). Buy me a beer at a con sometime for the super dramatic blow-by-blow of those three years.

Even though Community never happened, the time and effort have paid off. In the summer of 2014, in what turned out to be the final days before Yahoo made the deal that brought Community back, I visited Harmon’s animation studio Starburns Industries for the first time. I had reintroduced myself to Harmon at a podcast taping in Portland after the previous attempt to bring the show to comics had fizzled, and now over tacos and beer we discussed what a comic version could bring to the series. I’ve rarely had a more educational conversation than I did talking story with Harmon that day, and it was clear why the show and his Adult Swim series Rick and Morty are so brilliant.

In retrospect, the other thing we talked about that day turned out to be more consequential. Harmon was interested in Starburns Industries creating original comics, and pitched several possibilities. It made total sense: in addition to the numerous comics references in his various projects, like the Kickpuncher comic that came packaged with the DVD of Community season 1, plus the fact that the Harmontown podcast tapes at Meltdown Comics in LA, Harmon’s history with comics goes back to writing for the original run of his friend Rob Schrab’s wonderful Scud: The Disposable Assassin and its spinoff La Cosa Nostroid. 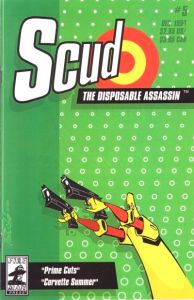 I took the second try at Community and another project back with me to Portland and set to work going through the approvals process. Meanwhile, Starburns’ comics line SBI Comics got underway and announced its initial projects at San Diego Comic-Con 2015. At the same time, I had started to plan a move into freelance editing, having spent seven years at my staff editing job at Dark Horse Comics and itching for a new challenge. After I gave my notice in August, I again flew to LA and took another meeting at Starburns, this time with SBI Comics president Simon Oré, who laid out the studio’s ambitious plans for its new comics line.

Several details remained to be hammered out, but the arrangement we put together was a freelance gig as one of Starburns’ two comics editors, along with Oré. Initially this covered a handful of projects generated by Starburns writers and artists, but over the following months more were added, along with the ability to accept pitches for Starburns’ consideration. With Starburns on the rise between the success of Rick and Morty and early buzz for its feature film Anomalisa, written by Charlie Kaufman and codirected by Kaufman and Duke Johnson, these were busy days, and the agreement wasn’t ready to be announced until last week, but we’re now full speed ahead. 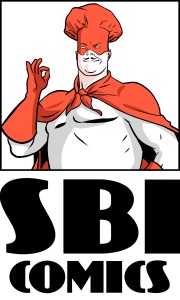 It’s been a crazy few months, leaving the job that I am known for and not being able to announce what’s next right away (there’s more to come), so naturally going public with this is a pleasure, and I couldn’t be more excited about the projects that are currently greenlit, as well as some pitches I’ve got in hand. I’ll be editing one of the currently announced projects, but most are still under wraps, and they will surprise and delight Starburns fans once they go public. I’m so proud of what I’ve done to date, but 2016 is shaping up to be my most exciting year in comics yet. Every project I’m on is something I believe in, and in the case of Starburns I am working with personal heroes on titles unlike I’ve ever done before. In a way this has been years in the making, and this is just the start.

And don’t forget, I am still freelance, so I am available for editing, project management, and consulting at editing@brendanhwright.com.