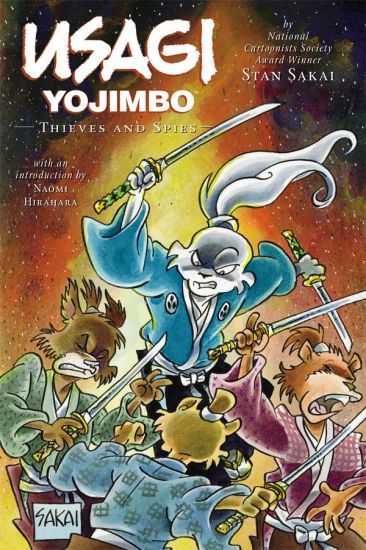 Stan Sakai is one of comics’ masters, no question, and Usagi Yojimbo is one of the great series of all time. I didn’t read a lot of Dark Horse books before I joined the company as assistant editor to Diana Schutz in 2008, but I’d been a devoted Usagi fan for nearly a decade. One of the great thrills of starting that job was that I’d be assisting on Usagi, and issue #116 was the very first thing I worked on. (My first credited issue is #117, due to the short lag between new assistants at the time being hired on a trial basis and officially becoming permanent additions to the department, though I think that’s different now.)

If you are unfamiliar, you owe it to yourself to catch up with Stan’s wonderful creation. Loosely based on the historical figure Miyamoto Musashi, Miyamoto Usagi is a ronin, a samurai who, having lost his master in battle, now walks the warrior pilgrimage in pursuit of tranquility. However, his path more often leads him to iniquity, and his code of honor compels him to fight against the unjust, sometimes for hire as a yojimbo (bodyguard), but just as often because it’s right. The stories integrate Japanese history and folklore seamlessly, while the fact that the characters are animals universalizes the stories and is never directly referenced but lends wonderful possibilities to the designs. And what designs—and what art! Over the years, Stan has, like a sculptor cutting away everything in a block of marble that doesn’t look like an elephant, stripped everything out of his art that doesn’t look like his characters. The art is at once inviting and beautifully layered, with each issue possessed of rich emotion and thrilling swordplay. Most stories are completed within one chapter, as tightly plotted and gemlike as an adventure of Will Eisner’s Spirit, and when Stan tells a book-length story, it’s what the word “epic” was coined for. I still get excited just writing about how good it is.

It’s no secret that Usagi isn’t really edited in the same way that many series are—Stan sends in a cover and 2-3 sentence synopsis of what he’s going to do for Previews, and a couple months later a completed issue arrives via Fed-Ex. Sometimes we’ll make very small art corrections or fix some punctuation, and on very rare occasions Stan will ask for an opinion between two options on a page or ask if a harder-hitting ending is too rough, but that’s really it. Still, it’s an honor working with him, learning by poring over the art boards when they come in, and being a part of a legacy dating to the eighties. (First appearing in November 1984, Usagi is less than a year younger than me.)

I continued working with Diana and Stan on Usagi until 2012, when the series went on hiatus while Stan drew 47 Ronin, a miniseries based on the Japanese legend and written by Dark Horse publisher Mike Richardson. As we planned how to relaunch when 47 Ronin wrapped, I suggested we come back with an event miniseries fulfilling Stan’s long-gestating idea of pitting Usagi against the Martians of War of the Worlds. This became the miniseries Usagi Yojimbo: Senso and turned out to be Diana’s swansong on the series, as she retired thereafter. In the meantime, I had taken on some other projects with Stan, including a reprint of his pre-Usagi rabbit warrior in The Adventures of Nilson Groundthumper and Hermy, as well as the comprehensive library project The Usagi Yojimbo Saga and the original art showcase Usagi Yojimbo Gallery Edition: Samurai and Other Stories. But now, with Diana leaving the series, I got the opportunity to “edit” Usagi Yojimbo itself.

Beginning with the first issue back, #145, designer Cary Grazzini, assistant editor Jemiah Jefferson, and I set about updating the look of the series in order to make a splash for Stan’s triumphant return. Otherwise, it was the same old Usagi, not missing a beat since Stan switched his focus to human characters in 47 Ronin. Stan hit the ground running with “The Thief and the Kunoichi,” a three-parter featuring one of my favorites, the street performer/pickpocket Kitsune, who is just as tricky as the Japanese foxes of legend and does “what a girl has to to get by.” He followed that up with three perfect one-parters, culminating in issue #150, the last of my short tenure as editor. After seven years, I was ready for new challenges, and the nine months I’ve since spent as a freelance editor have been among the most rewarding of my life, but among my few regrets are that I was on Usagi such a brief time. Still, finishing with a milestone like #150, and its beautiful look at honor and contrasting sword styles in “Death of a Tea Master” is something I’ll always remember fondly. Incoming team of Aaron Walker and Rachel Roberts handled vol. 30’s concluding chapter, issue #151’s “The River Rising,” originally intended as the next issue back in 2012 before 47 Ronin came along. Spanning both ends of the hiatus, it’s a fitting close to the book.

I wholeheartedly recommend this, and while I did work on it, I feel truly unbiased, having loved Stan and Usagi for years before dreaming I’d have anything to do with it, and still reading it religiously now that it’s in the capable hands of my successors. My deepest thanks to Diana for bringing me in, Jemiah for working alongside me on my Usagi run, Ian Tucker for assisting on the first volumes of UY Saga, Aaron and Rachel for picking up the torch and assembling this collection, and Stan for creating one of the comics that made me want to do this. I’m there as long as you are.